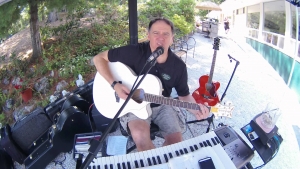 JOE FRAZITA
It all started in 1965, when I got an accordion for Christmas. After first learning to play by ear and then taking lessons for 3 years, I won “a major award”, becoming the 1970 NJ State Accordion Champion. A few years later, my dad purchased a home organ, which I taught myself to play. It was here that I learned how to PLAY THE BASS WITH MY FEET, which didn’t seem that important at the time, but would prove valuable years later. As I entered college, I began to write music and record demos of those songs.

During this stretch, I also played in a couple of garage bands that barely ever got out of the garage. My “big” break came in 1992 when I was asked to join the band EMI (as a keyboardist and backing vocalist) in it’s final year of existence. After the band’s demise, me and other former members of the band formed REDLINE in 1993. After playing many shows as the band’s keyboardist/rhythm guitarist/backing vocalist, REDLINE played its final show in 2003. After kicking around in a few cover bands in the interim, I formed SNOOZKA’S GIANTS (“The BIGGEST 2-man band you’ve ever heard”) in 2004 (with former EMI and REDLINE drummer Rob Connelly). In this band, I take over the lead vocalist role, play either acoustic guitar, electric guitar, or keyboard; all while simultaneously PLAYING THE BASS WITH MY FEET. Though this band has been and continues to be very successful, I always had a dream of going solo.

In the fall of 2007, this became a reality. Though the solo shows cover nearly the same material performed with SNOOZKA�S GIANTS, I also like to sprinkle in some original tunes. And like a SNOOZKA�S GIANTS show, I make my extensive song list available to the patrons, and encourage song requests, all night long.